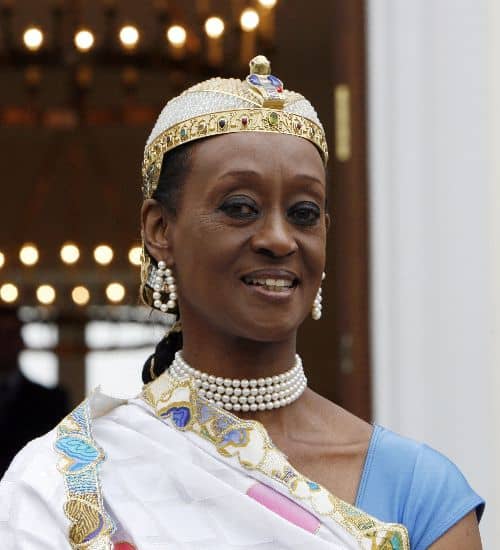 Princess Elizabeth Bagaaya is the daughter of His Royal Highness King George Rukidi III and Lady Kezia Rukidi of the Kingdom of Toro in Uganda.

In 1968, she became the first black model to grace the front cover of both the American Vogue Magazine, and in 1969, the Harper’s Bazaar magazine.

In the 1970s she was appointed the foreign minister of Uganda, by President Amin, later in 1974, she addressed the United Nations General Assembly, giving an inspiring speech in defence of the Africa in general, and Uganda as a country in particular.  This boosted her international image but it caused her downfall as foreign minister, after which she fled the country and sought political asylum in the UK.

She returned in 1979 and was appointed by President Museveni, as Uganda’s Ambassador to the United States, from 1986 – 88, during which time she used mass media to educate the American public about Africa.

In 1993, when President Museveni’s government restored cultural leaders, Princess Bagaya returned to serve her people as Princess Royale to her brother, King Patrick Kaboyo Olimi VII.  After his untimely death in 1995, she was named as one of the guardians to her three and a half year old infant nephew, His Royal Highness (King) Omukama Oyo Nyimba Kabamba Iguru Rukidi IV.

She is one of the key players in rejuvenating  the Kingdom, including refurbishing the shrine of the first King of Toro, the building a cultural centre for the preservation of Toro kingdom’s heritage and rebuilding of Toro’s Royal palace. Today, she continues to devote her time to the reconstruction activities of The Batebe of Toro Foundation, an initiative whose mission is to alleviate poverty and promote human development to children, youth, women and the elderly.