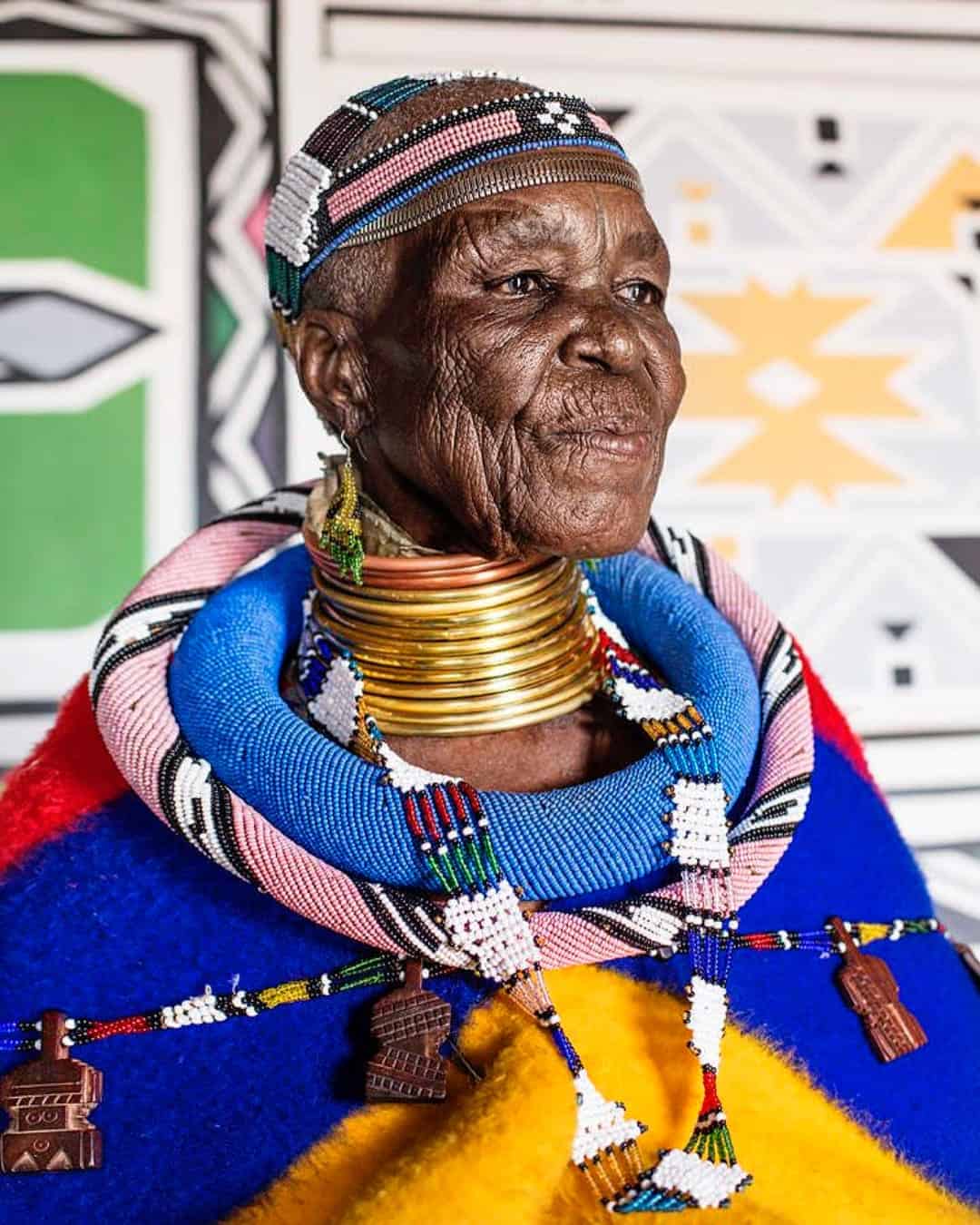 Esther Nikwambi Mahlangu, also know as the grandmother of Art,was born in 1935, and began her artistic journey at 10 years old when she was taught the skill of mural painting by her mother and grandmother, a cultural tradition of her native South Ndebele people for females to paint walls.

In 1989, she worn the hearts of international world at a European art exposition titled ‘Magiciens de la terre’  (Magicians of the World). She is globally acclaimed for her abstract paintings that are inspired by Ndebele design, and is one of the African artists whose art is often exhibited internationally.

In 1991, she became the first female and first African to design an art car, the BMW 525i, reknown as the first “African Art Car”,which she painted with typical motifs of the Ndebele tribe. In 1994, the car was exhibited at the National Museum of Women in the Arts in Washington, DC and at the British Museum, London later in 2017.

In 1997 she was commissioned by British Airways to paint the tail of aircraft, and also went on, in 2007,  to paint the new ‘Fiat 500 Why Africa’ which was presented in the ‘Pigozzi collection‘ exhibition.

Between 1980 and 1991 she was a resident at the Botshabelo open-air museum, which presents Ndebele culture to visitors.

In support of Belvedere’s partnership with AIDS charity RED’s, #MAKETHEDIFFERENCE campaign, Mahlangu designed a limited edition of Vodka bottles.  The campaign went on to support over 30,000 HIV-positive women with access to life-saving treatment to stop the transmission of HIV to their babies.

Mahlangu’s work is displayed in private, corporate and public galleries around the world. Some of her most famous murals have been exhibited at the New Identities Exhibition in the Bocum Museum in Germany, at the Virgin Atlantic’s music store in Times Square, the National Museum of Women in the Arts in Washington DC and at the Civic Theatre in Johannesburg.

In 2006 she was awarded The Order of Ikhamanga (Silver) by the President of South Africa, an award normally given for the recepient’s  invaluable contribution to the arts, culture, literature, journalism, music, and sports. In 2018, she was awarded with an honorary doctorate by the University of Johannesburg.

Today, her village home, Mpumalanga, is inundated with visitors from around the world, keen to explore her complex approach to wall decoration. She directs a school which teaches young girls not only painting but also the technique of painting designs on particular compositions of beads.